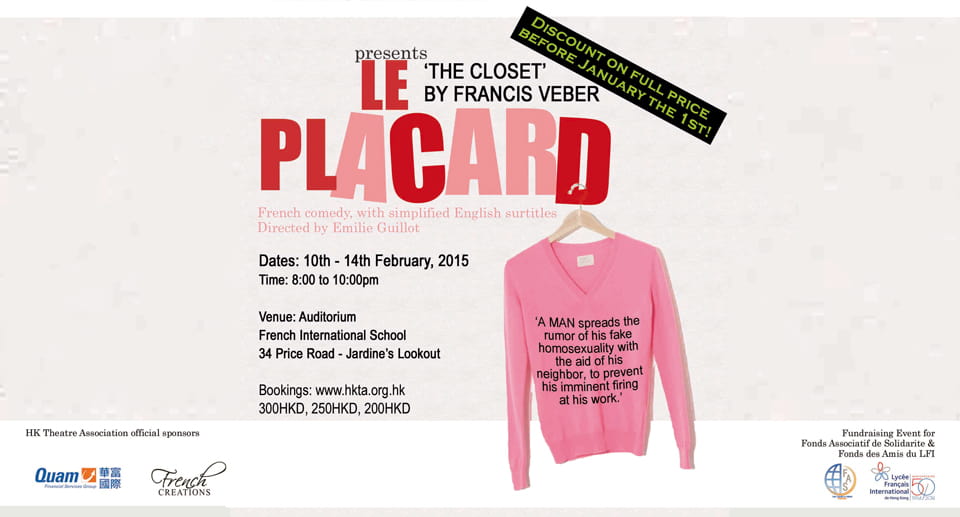 By Francis Veber
Comedy in French with English simplified surtitles.

Plot: A man spreads the rumor of his fake homosexuality with the aid of his neighbor, to prevent his imminent firing at his work.

Emilie Guillot, born in Brittany, France, is known not only as an actress/performer but also as a drama director and producer of quite a wide number of live performances. Her debut was as a ballet dancer. She then graduated from ‘L’Ecole de Théâtre Bellevue’ with a diploma in ‘Corporal techniques and improvisation’. She spent years practicing on stage and in front of the camera, with well-known acting coaches, directors, and producers such as Christian Lucciani, Sylvie Boutley, Frédérique Farina, Georges Bécot, Jean-René Lemoine, Daniel Cling, Steven Soderbergh, Stanley J. Orzel.

Finally she graduated with a National Diploma in Performing Arts and in Drama Directing, from the renowned French Drama School ‘Le Cours Florent’, full of contentment and confidence. In July 2003, she arrived in Hong Kong and started a drama production company (Mon Café-Theatre Ltd) with which she has developped the concept of Café-theatre in HK. Emilie has also been seen as a performer and actress in ‘Isabeau’, ‘The Killing of Sister Georges’, ‘Sandman’, ‘California Suite’, ‘The Sneeze’, ‘God of Carnage’, ‘Lumina –webseries’, ‘Push’ feature film, ‘A little conversation – independent film’, ‘Boxed in’ with best film, best acting, best directing awards, ‘Chinese Zodiac 2012’, Jacky Chan production, and ‘Far away Eyes’ – feature film. In addition to this, she is a certified Cinema Director and Line Producer from Hollywood Film Institute and HK International Film School. She is now the Artistic Director of ‘HK Theatre Association Ltd’ with which she coaches acting to adults and young kids.

No votes yet.
Please wait...
Voting is currently disabled, data maintenance in progress.